A few weeks ago I visited Loddon Nature Reserve which is located in Twyford along the river Loddon hence the name I guess . This reserve is part of the Berks, Bucks & Oxon Wildlife trust(BBOT). The habitats of Loddon Nature Reserve are wetland and woodland. The reserve was quite hard to find and it took us awhile to see a nature reserve sign and had to drive up and down the road for a while to find a place to park. The species we saw on this visit was the common tern, coot, great crested grebe, grey heron, mallard, mute swan, Canada and greylag goose. Species that can be seen at the reserve according to the BBOT are: purple-loosestrife, yellow iris, blackcap, common tern, coot, cormorant, gadwall, great crested grebe, grey heron, moorhen, oystercatcher, pochard, shoveler, teal, tufted duck, whitethroat, wigeon and willow warbler.
Common Tern (Sterna hirundo)

The common tern is medium sized and a silvery-grey with a large black cap and short red legs and a orange beak with a black tip. They are quite noisy and breed on sandy coasts, in dunes and islands but also breed inland on gravelly banks of lakes and rivers. To catch their food they plunge-dive into the water. They are a summer visitor and are threatened by habitat loss, pollution and disturbance.
Statistics:
• Length – 31-35cm
• Wingspan – 88cm
• Weight – 130g
• Average Lifespan – 12 years

Conservation status:
In the UK they are classified as an Amber list species (under the Birds of Conservation Concern Review)

Coots are a wading bird and are often seen in park lakes, ponds, reservoirs, gravel pits and rivers they are a widespread species. Coots are black with a bright white bill. They spend most of their time in the water and dive to catch for food. They breed in the spring and lay around 6-9 eggs. Even though they are common their wetland homes are at risk from development, drainage and pollution.

Great Crested Grebes are waterbirds, which feed on small fish and aquatic invertebrates, they dive to feed and also to escape. Because their feet are places so far bar on their bodies they are clumsy on land. The great crested grebe as white cheeks, dark cap, orange ruff and a white neck and dark body. They can be found on lakes and reservoirs. The grebe’s elegant feathers made them nearly hunted to extinction in the UK.

The grey heron is one of Britain’s most familiar birds and is often seen standing very still in shallow waters waiting patiently hunting fish. Their diet mainly consists of fish but they also eat small birds & mammals and amphibians. Grey herons have long legs, long yellow beak with grey, black and white feathering with a black eye stripe. They are seen around any kind of water such as garden ponds, lakes and rivers. 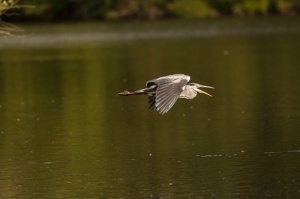 Common at the local pond or park are often quite tame due to being fed by the public regularly. Males have green head, yellow bill and a maroon-brown chest and grey on the body. Females are mainly brown with a orange bill and quite speckled in comparison. They breed all over the UK in summer and winter. 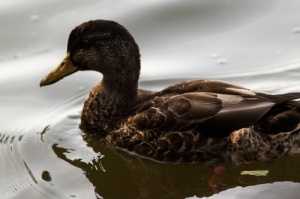 Under the birds of conservation concern review Mallards are classified as an Amber list species in the UK, this is because non-breeding populations are declining. This displays that the survival of some common waterbirds are under threat because of the loss and degradation of wetland habitats.

A large, white waterbird. The mute swan has a long, curved neck with orange bill with black at the base. They feed on plants and normally mate for life, often seen on ponds and lakes all over the country.

Common across most of the country expect North Scotland. The Canada goose is not native to this country and was introduced 300 years ago from North America. They spread across the UK becoming pests in some areas after the 2nd world war. They are a large goose with black head and neck and white cheek patches.

The greylag is the ancestor of most domestic geese, they are the largest and bulkiest wild geese native to the UK. They have short  orange bills, are pale grey with pink legs and like to graze where cattle or sheep are grazing. They are easily seen in lowland areas of the UK all year. Wild ones are found mostly north of the Solway. 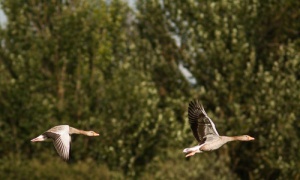 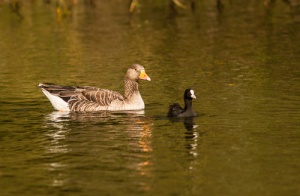 Under the birds of conservation concern review they are classified as an Amber list species in the UK.